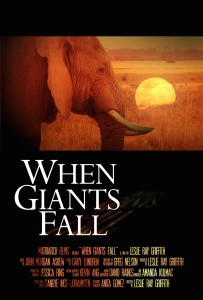 Our Community Partner Women in Film + Television Vancouver is gearing up for its 11th Annual Vancouver International Women in Film Festival — #VIWIFF2016, March 8-13, 2016. WIFTV is a member driven non-profit society and has 35 chapters around the world. The society’s focus is to further the artistic and professional development of women in the Canadian media community.

The impressive lineup features 46 Canadian and international productions created by Women.   More than 24 Canadian and ten international  filmmakers will be in attendance for post-screening Q&A, artist talks, workshops and discussion panels.

Reel Causes is proud to support the screening of the anti-ivory trade film When Giants Fall, which will screen on Sunday March 13th at 3 PM at the Vancity Theater – 1181 Seymour Street. The screening will be attended by the filmmaker, Leslie Griffith and followed by a panel discussion with special guests from the wildlife conservation and ecology worlds. The focus will be on how humans are working to preserve our natural spaces, and the importance of diversity in wildlife habitats around the world in keeping our planet healthy.