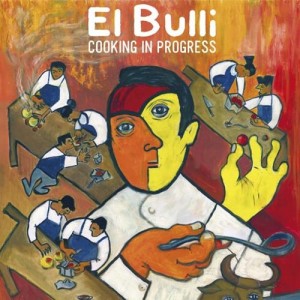 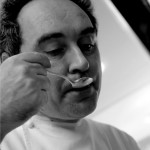 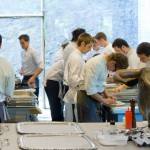 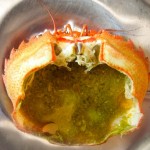 Photo right : “A hollowed out crab filled with crab brain soup. We drank this directly from the shell. It tasted like liquified shrimp heads.” — A Life Worth Eating

Each night, El Bulli served a tasting menu of 30-plus courses, prepared by over 40 chefs, to a single seating of up to 50 guests. For its last season, before transforming into a culinary academy, El Bulli received over 2 million requests for 8,000 available seats.

SYNOPSIS: For six months of the year, renowned Spanish chef Ferran Adrià closes his restaurant El Bulli, repeatedly voted the world’s best, and works with his culinary team to prepare the menu for the next season. An elegant, detailed study of food as avant-garde art … a rare inside look at some of the world’s most innovative and exciting cooking.

THE FILM MAKER
Gereon Wetzel was born in Bonn, Germany, and earned an M.A. in Archeology from Heidelberg University. He worked as a language teacher and an archeologist in Spain before completing the documentary filmmaking program at the University for Film and Television (HFF Müchen) in Munich, where he currently lives and works as a freelance author and filmmaker.

Karina Longworth : Molecular gastronomy rock star Ferran Adrià’s Catalonian culinary paradise El Bulli is due to serve its last meal on July 31, the overhead of running the world’s most innovative, most exclusive restaurant dwarfing the income recoupable from serving 8,000 $500 meals a year. Adria plans to transform the compound into “a think tank for creative cuisine”.

Cooking in Progress documents the 2008–2009 season, one of the last in El Bulli’s life as a restaurant, from the start of the six-month workshopping process Adrià oversaw each year in a Barcelona kitchen lab, to the debut of his new creations in the seaside dining room.

“This year is the year of water,” Adrià declares, as his kitchen sets to work inventing a hazelnut oil “cocktail,” “a ravioli whose pasta vanishes,” and a fish dish finished with ice chips. Dozens of young punks labor to please their elder master. The creative stakes are high: “What matters is that it’s magical, that it opens up a new path,” Adrià reminds.

Cooking in Progress is, in fact, all magic and no path: This is extreme fly-on-the-wall vérité, with only the barest context provided (no helpful TV-style titles here—when it comes to identifying ingredients and techniques, viewers are usually left to their own devices) as the culinary impossible is realized one painstaking step at a time.

about The Gratitude Æffect Foundation

Gratitude Æffect works to raise money and awareness in the effort to end homelessness. Its primary goal is to engage the average citizen of Vancouver to do one thing that will help end homelessness in our city now. In 2012, the foundation has started to tackle the issue of hunger, especially among children. This has lead to the Streetsmart Project to support local food banks.